The ‘Promoting Renewable Energies in Namibia’ (PREN) Project, funded by the Bundesministerium für Wirtschaftliche Zusammenarbeit (BMZ), was implemented from 2017 to 2019. The Project sought to educate and raise awareness about renewable energies and resource efficiency in Namibia with a focus on schools and start-ups in rural areas in line with the implementation of the COP21 Paris Agreement and Sustainable Development Goal No. 7 of the United Nations Development Programme (UNDP) to ‘ensure access to affordable, reliable, sustainable and modern energy for all’. The Think Namibia Campaign was adjusted and continued by the PREN Project which assumed a similarly dynamic approach like the Environmental Awareness Project consisting of information sharing and educational material development, public dialogue platforms, training of multipliers and the continuation of the Think Campaign in its second phase.

The Objectives of the PREN Project were:

The PREN Project’s main implementing partners were the Desert Research Foundation of Namibia (DRFN), EduVentures, the Namibia Energy Institute (NEI), the Namib Deserts Environmental Education Trust (NaDEET), and the Centre for Enterprise Development (CED). Our secondary partners included the National Youth Council (NYC), the Ministry of Gender Equality and Child Welfare, the Ministry of Education Arts and Culture, the Ministry of Information and Communication Technology, the Omusati, Kunene and Ohangwena Regional Councils, as well as the Namibia Power Utility Company (NamPower). Some activities were also co-funded by the Nedbank Namibia and the British High Commission.

Outcomes and Achievements of the PREN Project:

The PREN Project continued to build further upon the Think Namibia Information Campaign. The first phase of Think Namibia was geared towards strengthening environmental sustainability in Namibia through awareness raising on environmental protection and climate change adaption and mitigation practices. The second streamlined the focus of the first phase to the promotion of renewable energies and energy efficiency. The Campaign logo was also rebranded to create a new visual identity for the Campaign; Think Namibia transformed to TH!NK Namibia. 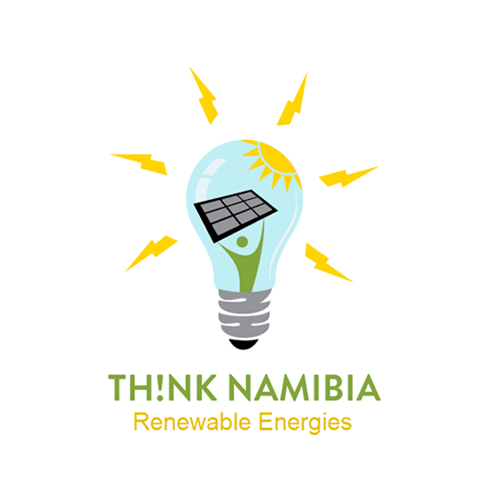 In keeping with the key objective of the PREN Project to facilitate greater use of renewable energies and energy efficient practices in Namibia, the project equipped a total of six remote schools in the Kunene, Zambezi and Kavango-East Regions with basic 3kW solar energy systems. In the interests of sustainability and self-sufficiency, trainings were conducted by the Namibian Energy Institute (NEI) for selected members of the school’s management team on how to operate and maintain their newly installed solar system.

In total, the PREN Project successfully implemented 40 workshops and trained over 800 individuals on renewable energy and energy efficiency best practices. One such training was the Solar Cooking and Sustainable Living Workshops which were conducted by the Namib Desert Environmental Education Trust (NaDEET). Over the course of five days, the participants learnt how to build and use, for example, fuel-efficient stoves or bucket showers in order to demonstrate the extent to which many items can be reused and recycled rather than being thrown away.

VIDEOS: Other workshops and trainings

The project also organised 20 dialogue events of varying formats which were attended by over 4,500 people both in Windhoek and more rural settings. One such event, for example, covered the important theme of ‘Making Global Goals and Agreements on Sustainability Relevant and Practical for People at the Grassroots Level’.

A further achievement of the PREN Project was the Data Portal on Rural Electrification developed by a group of four students from the Worchester Polytechnic Institute (WPI) in the USA. The portal includes schools and clinics with and without electricity in rural areas in Namibia. The system is able to accurately trace distances between various facilities and the nearest power lines as well as tracking the ratio of students to teachers in each setting.

Games for the SDG’s

Lastly, PREN facilitated the continuation of the Games for the SDG’s, which first originated from the work of the Environmental Awareness and Climate Change Project. These events consist of a series of monthly games aimed at building awareness and promoting active participation in efforts to achieve the UN Sustainable Development Goals by Namibian youth.