Ohangwena Region, 19 June 2018: While there are still 71 schools unelectrified in the Ohangwena region, pupils and teachers of the Omuuni and the Ondjabayonghalu Combined Schools have good reason to smile after having been equipped with a 3kW Solar PV Systems. Through the Promoting Renewable Energy in Namibia (PREN) Project of the Hanns Seidel Foundation (HSF) Namibia two systems were handed over. The Special Adivsor to the Ohangwena Governor, retired Major-General Peter Nambundunga, as well as the German Ambassador to Namibia, H.E. Christian M. Schlaga, as well as other dignitaries inaugurated the systems on Tuesday, 19 June 2018, a few kilometres shy of the Namibian-Angolan border.

More than 300 pupils and a wide variety of dignitaries, including the Special Adivsor to the Ohangwena Governor, retired Major-General Peter Nambundunga and the German Ambassador to Namibia, H.E. Christian Matthias Schlaga, the Councillor of Okongo Constituency, Hon. Fanuel Ndadi, the Director of the Directorate of Education, Arts and Culture, Ohangwena, Mr Isak Hamatwi, Centre Head of the Centre for Renewable Energy and Energy Efficiency (NEI) NUST, Mrs Helvi Ileka and Head of Namibia Office of the Hanns Seidel Foundation, Dr Clemens von Doderer, came together on Tuesday 19 June to officially hand over two 3-Kilowatt solar PV systems which were installed at the Omuuni and the Ondjabayonghalu Combined School, respectively.

This forms part of the Promoting Renewable Energies in Namibia (PREN-) Project, an initiative of the Hanns Seidel Foundation set out to contribute to the increased use of renewable energies, as well as energy and resource efficiency in Namibia, focussing on schools, SMEs and start-ups in rural parts of Namibia. The PREN Project together with the re-launched TH!NK NAMIBIA Campaign is a three-year project (2017-2019) co-implemented by the Hanns Seidel Foundation together with various project partners, including the Desert Research Foundation of Namibia (DRFN), Namibia Energy Institute (NEI) and EduVentures.

In a statement read on his behalf by his special advisor retired Major-General Peter Nambundunga, Ohangwena Governor Usko Nghaamwa welcomed the intervention by the HSF and its partners, saying that it could not have come at a better time. The intervention will contribute to the attainment of the targets as set out in the Harambee Prosperity Plan, particularly, the targets under infrastructure pillar which states that all schools should be electrified by 2020.<spanstyle=”caret-color: #848484; color: #848484; font-family: ‘Open Sans’, sans-serif;”> The Governor thanked the Government of the Federal Republic of Germany and the Hanns Seidel Foundation through the PREN Project for meeting the Namibian government halfway to achieve its targets. He encouraged others to join efforts, as there are still 71 un-electrified schools in the Ohangwena region, still needing to be electrified.

Since education and particularly education making use of modern technology is close to his heart, His Excellency Christian-Matthias Schlaga, Ambassador of the Federal Republic of Germany to Namibia, expressed his excitement that through renewable energies schools.

located in remote areas, such as the Omuuni and Ondjabayonghalu Combined School, can stay connected with the outside world. It is for that reason that he, accompanied by the Special Advisor to the Governor of the Ohangwena region and other officials, would travel to the far northern region of the country and support such an initiative. On a lighter note he stressed that from now on there will be no excuse for learners not to study at night because the school has been electrified in order to cater and meet the learners’ needs. This initiative must not end with Hanns Seidel Foundation’s PREN Project, but it must inspire other organisations to come forth and assist or support off-grid schools with electrification in a plan of meeting the government halfway.

Mr Isak Hamatwi, the Director of Directorate of Education, Arts and Culture in Ohangwena region expressed his profound appreciation to the Hanns Seidel Foundation and its partner for going out of their way to ensure that they contribute to the provision of quality education. “Energy in the form of electricity is one of the measures of social progress for individuals, for societies, for institutions such as schools and for the nation. Its availability is a catalyst for productivity,” he stated. Furthermore, he appreciated the availability of electricity for it would ensure opportunities for better academic results for the learners. Not only does it benefit the learners, but it is also an opportunity for teachers to actively and effectively make use of available technical devices such as personal computers and projectors to enhance teaching for the learners.

In order to ensure safety and a long lasting lifespan of the solar systems, Honourable Fanuel Ndadi, Councillor of Okongo Constituency urged the students and teachers of the two schools to take responsibility over these systems. “Be a security guard” he encouraged the respective school communities at large.

Mrs < the Centre Head of Centre for Renewable Energy and Energy Efficiency echoed the remarks of Hon. Ndadi, urging the two Principals of the recipient schools to ensure that the systems are correctly used in order to maximise the benefits from the systems over a longer period of time. Mrs Ileka cautioned that the installed 3kWh systems have limitations and the users should not to overload the systems.

During his concluding remarks, the Head of Country Office of the Hanns Seidel Foundation, Dr Clemens von Doderer, asserted that the two schools were selected as pilot schools to be equipped with the solar PV systems, based on a number of criteria set out in a baseline study at the beginning of the project and confirmed by a wide variety of stakeholders, including the Ministries of Education, Arts and Culture (MOE), of Mines and Energy (MME), and of urban and rural development (MURD), as well as of the Ohangwena Region.

He continued saying that the PREN Project will electrify up to six off-grid rural schools, using renewable energy hardware during the project implementation phase 2017-2019. The electrification of the first two schools involved a fair amount of learning also on our end. All findings and experiences made along the way have been and will be documented to make life easier for others who would like to electrify rural schools with renewable energy technologies here in Namibia.

Not only did the schools receive the Solar PV systems, worth approx. NAD 210 000 each, but also trainings were conducted for selected members of school management on how to operate and maintain the system by the Namibia Energy Institute (NEI), further ensuring the sustainability of the project. Excited about the successful cooperation, Dr von Doderer thanked all involved stakeholders that contributed to the installation of the two systems. 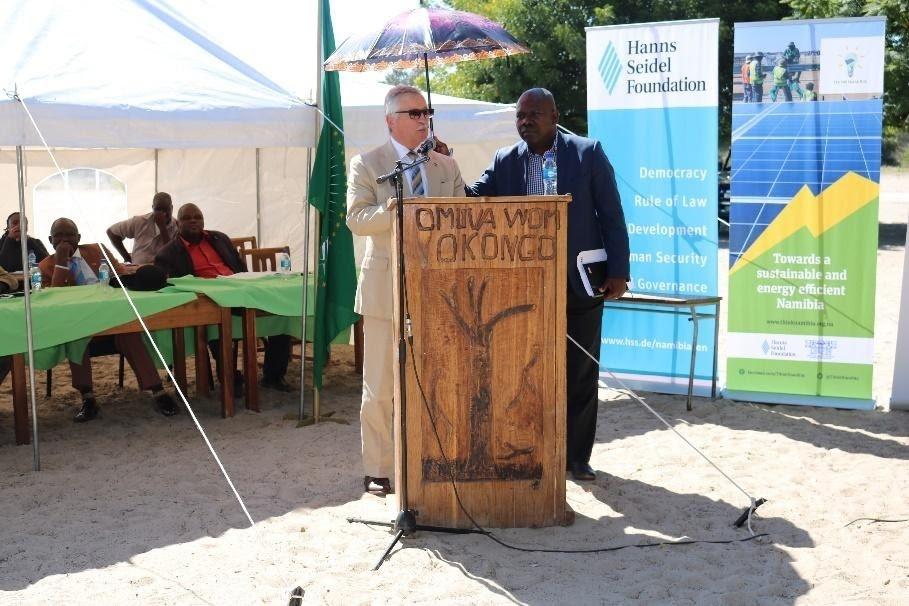 His Excellency Christian-Matthias Schlaga providing his remarks, while Mr Etuhole Haimbili, the Deputy Director for Development Planning at the Ohangwena Regional Council, provides some shade for the speaker. 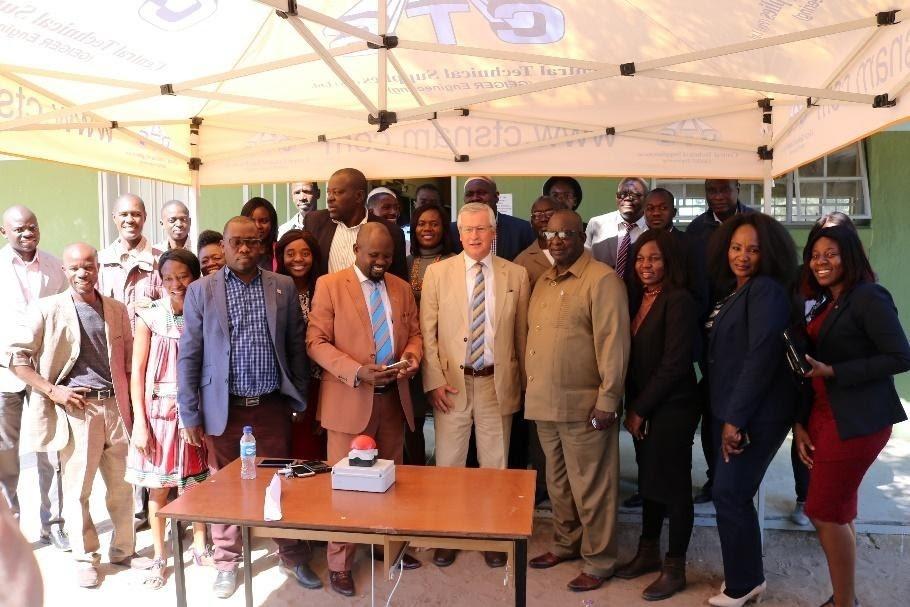 Group photo (from left to right): in front Mr Benson Muramba, Chairman of the Board of Directors: EduVentures Trust; Mr Isak Hamatwi, Director, Directorate of Education, Arts and Culture for Ohangwena region; His Excellency Christian-Matthias Schlaga; Retired Major-General Peter Nambundunga, Special Advisor to the Governor of Ohangwena region and teachers and officials. 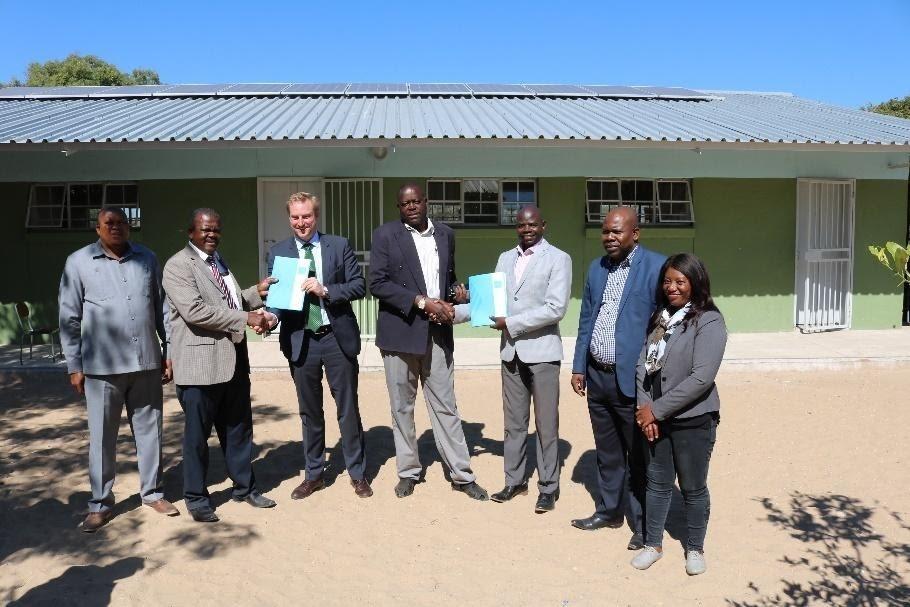 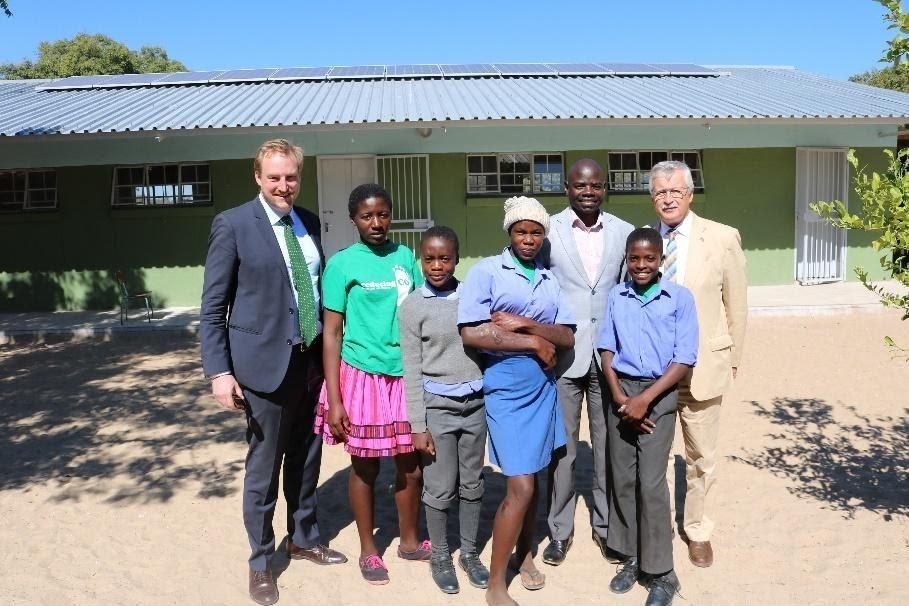 Tweet
Are Solar Panels the New Trend?
The Paris Agreement On Climate Change: The Essenti...